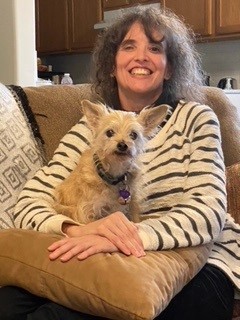 This isn't Going to Stop Me

As a mother of twin sons born nearly 30 years ago, Kimberly Frieson, 48, fondly recalls looking forward to the challenges and joys of parenting twins, but only a few years after her sons were born those challenges became even more daunting after Kimberly began losing her vision.

Kimberly was born with Retinopathy of prematurity (ROP), an eye disease that most often affects premature babies, causing abnormal blood vessels to grow in the retina. Growing up, Kimberly always knew that she would likely experience some level of vision loss as a result of being diagnosed with ROP as an infant, living most of her childhood with only 20/200 vision in one eye, but she managed to adapt. It wasn't until after the birth of her twins in 1997 that Kimberly experienced losses with her remaining vision.

"I woke up and everything just looked different," Frieson recalls. "I thought I needed new glasses, and went immediately to an eye specialist, who diagnosed me with advanced retinal damage and said I won't regain my vision." Like many with progressive vision loss, Kimberly was initially overwhelmed following her prognosis. "I was numb, and kept thinking how am I going to raise my kids? I thought my life and independence as I know it was completely over."

Kimberly credits her close-knit family's emotional and physical support for getting her through her the initial weeks after her vision loss, including her parents and grandparents. "They never looked or treated me differently. I remember my mother's constant words of encouragement," said Frieson. "She kept reassuring me that my vision loss isn't going to stop me from doing anything I wanted, and this was just another hurdle in life."

Living in a rural area of California at the time, Kimberly faced other obstacles. A lack of public transportation in her community made it difficult for her to access needed assistance and get in-person help. While her grandparents provided babysitting, her parents sold their compact car and bought a van to transport Kimberly to vision rehab programs and support groups, including a low vision center in nearby Bakersfield California where Kimberly first learned about Hadley from her rehab instructor.

"Hadley was perfect for me at that time because it was distance learning. No one had to drive me anywhere to get the resources I needed. I started taking braille classes from Hadley, learned to use a white cane, and was able to navigate my household routines as a new parent of two toddlers."

A Hadley learner for more than 25 years now, Kimberly has witnessed Hadley's growth over the past several decades. "They have come such a long way since I was first introduced to Hadley," said Frieson. "After I lost my remaining vision, I turned to Hadley again to relearn many of the basic classes I took when I had eyesight. "I was thrilled about all the new learning opportunities that Hadley is now offering and being able to do so at your own pace is a big advantage."

After multiple surgeries, including a failed cornea transplant procedure, today Kimberly has only slight light perception. She knows that there will always be new challenges, but feels she is better equipped to handle them now thanks to Hadley and the support of others.

Kimberly has since taken over 300 Hadley workshops and tutorials, including Hadley's popular Dining Out, Organizing Your Home, and Cooking Series, and has embraced technology, learning to use Alexa to assist her in navigating daily life. "My goal is to is to take every workshop available through Hadley," Frieson continued. "I never thought about it before, but small things, like being confident when going to a restaurant, can make a huge difference for someone with a visual impairment."

Kimberly's advice to others with vision loss is to allow yourself to have those feelings of loss but realize that resources like Hadley are readily available. "Losing your vision doesn't have to limit you as a person."

For her commitment to learning Kimberly has been named the latest recipient of Hadley's HEROES Award, given to those who help further Hadley's mission to create personalized learning opportunities that empower those with vision loss or blindness to thrive at home, at work, and in their communities.