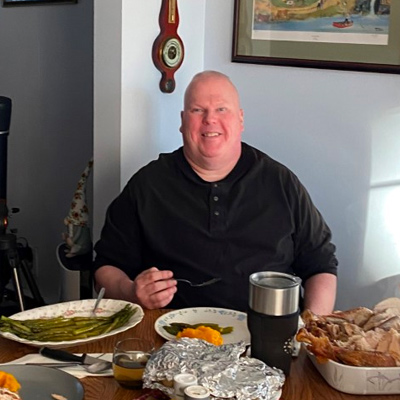 Tom Piche of Rhode Island spent his entire career in the service industry. He grew up working on cars alongside his dad, an electrical engineer who also ran a garage helping friends and neighbors with their vehicles. When Tom was getting close to the age of learning to drive himself, his dad pointed to an old 1978 Ford Fiesta up on cinder blocks in their backyard and challenged him to gather all the parts needed to rebuild it and make it road worthy. It took him a year to do it, but Tom succeeded and had himself his first car to boot. Given his mechanical aptitude, it wasn’t surprising that Tom decided to become a mechanic. "From there on I was a regular Mr. Fix It," Tom jokes.

He spent thirty years working on all sorts of cars and trucks in several car dealerships along the way.

When he was about 45, Tom started noticing he had some blurred vision in his right eye. He was doing video training and noticed that his right eye was severely blurry. He made an emergency appointment with his optometrist who saw something in Tom’s eye that indicated he should be seen by a retina specialist. He was ultimately diagnosed with macular telangiectasia, a rare genetic disease that can cause the loss of central vision.

Under treatment for this condition, things got better with his eyesight.

At the age of 47, Tom had the opportunity to reinvent himself and did so. He took a sales position selling janitorial supplies. He thrived in that career, too.

Then, Tom started noticing that vision from his left eye too was getting blurry. A key concern for Tom was that his eyesight was making it difficult for him to drive safely. As a regional sales representative, he drove a lot --- about 3,500 miles a month. And it got to a point where that was no longer possible.

So, at the age of 55, Tom found himself needing to reinvent himself once more.

"In the beginning, I was overwhelmed. I kept thinking, ‘What do I do now?!" Tom remembered.

His oldest daughter stepped in and began researching. She found resources for her dad. One of those was Hadley.

Since joining Hadley several months ago, Tom has completed nearly 80 workshops, many of them on technology for those with vision loss. He has also taken the time to write thoughtful comments about what he likes best and what misses the mark, all of which helps Hadley’s product development efforts tremendously. Tom also enjoys participating in our monthly call-in groups. Tech It Out, our group that discusses which tech tools are out there and how to best use them, and Resource Roundtable, our group dedicated to showcasing the wide variety of other resources for people with vision impairment, are his favorites.

"I really like the mix of people who join the calls. It helps remind me that I’m not alone on this journey," Tom reflected. "There is life after vision loss. You may need to reinvent yourself, but you can learn to adapt and continue to make it a life worth living. It does take time, though. It takes patience."

"The more things you can put in your toolbox, the better you are. So, I joined some of the resource groups and listened to Hadley podcasts and have taken lots of workshops."

Looking back on what things have helped him navigate vision loss, Tom acknowledged that his amazing wife, Donna, has always been there for him; "she’s a wonderful gift and real blessing from God to me." Tom also realized that he was leaning on his Faith more than ever. He reflected that "it’s through trials and suffering that we become more compassionate towards others. I like to serve others and I am still able to serve. I know that the value of my life in the end will be measured on how many people are better off because I lived."

Tom has been named a Hadley Hero for his contributions to content and our groups. Thank you, Tom. Hadley is better off because of you.