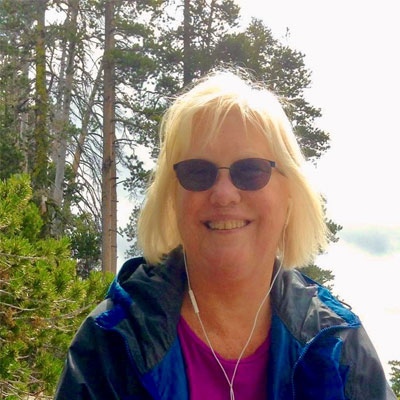 Sheila grew up in Southern California. When she married her husband, however, the couple decided they wanted the adventure of living somewhere completely different from their hometown. They moved to the Pacific Northwest. Living on a three-acre farm near Portland, OR and raising their child was just the adventure the couple hoped for. And when their son started school, Sheila decided to go back to school herself and get her teaching degree. She spent the next 20 years teaching the third grade.

For many of those years, Sheila was being treated for diabetic retinopathy. Changes to her vision were slow and subtle at first. Decreases in her peripheral vision eventually grew more profound, however, and she found herself walking into things; even walking into children in the classroom.

She took a leave of absence from teaching and went back to school to get her master’s degree in social work. "I loved working in the schools, but I just didn’t feel comfortable doing a full classroom of kids anymore. Working one on one or with small groups worked out much better for me," Sheila reflected.

All the while, Sheila rarely spoke to anyone about her vision. "I didn’t want to admit to anybody that I was having these vision problems," Sheila remembered. "It was all just my own little secret."

An experience at school one day, however, changed all that. Sheila needed to go into a sixth-grade classroom to pick up a student. As she made her way to the front of the classroom, Sheila accidentally knocked over a student’s science project and the teacher’s full vase of flowers. There was dead silence in the classroom. Sheila felt humiliated.

When she told her husband that evening that she was going to have to quit because she was just embarrassing herself, he said "Have you ever thought about telling the truth? Why not tell people about your vision? Why not use your cane at school?" And while she was still hesitant, she decided to take his advice. Sheila went back in to talk to the sixth graders the next day. "What did you think was going on with me yesterday when I knocked over things?" she asked them. They responded that they thought she was drunk or on drugs. "It was an eye opener for me," Sheila remarked. "Would I rather have people know that I have some vision loss or think that I’m drinking on the job?"

At that point, she pulled out her white cane and began telling the class about her vision. "They were so interested. In fact, they became my best friends for the whole rest of that school year," Sheila joked. It was a wonderfully poignant, teachable moment. Sheila felt relieved and the class learned a lot about disability and how to accommodate others. In fact, her talk was so helpful that teachers from the other classes asked Sheila to speak to their students, too.

Looking back, Sheila reflects that keeping her vision loss a secret from almost everyone was quite harmful to her emotional health, too.

When she looked for help from the state commission for the blind, she ended up working with a terrific instructor. He not only taught her how to use a white cane to get around safely but helped her realize that vision loss didn’t mean she was defective or incompetent. He reassured her that she wasn’t less of a person due to this disability. That combination of learning skills to live her life with less vision and beginning to adjust emotionally to her new normal made all the difference to Sheila.

At this point, Sheila is quite comfortable talking about and getting around with her compromised vision. Knowing how helpful it was for her to talk to others experiencing vision loss who "get it," Sheila has volunteered to be one of Hadley’s first peer mentors. Helping others newer to the experience who may be struggling to find their footing has been a rewarding experience for Sheila. "I think what it’s giving the mentees is a person who can relate and encourage and listen. And it’s good for me, too. It makes me feel good to help them. I’m so glad Hadley is addressing both the practical skills and the social/emotional side of vision loss. Both are so very important," Sheila reflected.

Sheila has been named a HADLEY HERO in recognition of her help and contributions. "Sheila is truly helping Hadley be the best we can be," Marc Arneson, Hadley’s Director of Community and the person who nominated Sheila for the award, remarked.

Thank you and congratulations, Sheila!