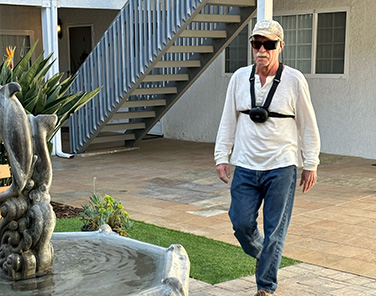 Ron Peterson is an engineer who spent 40 years working for the U.S. Navy. He loved his work, but technology wasn’t Ron’s only interest: For most of his life, he has also loved volunteering and helping others.

Ron’s interest in giving his time began when he was 10 years old and heartbreak struck his family: Ron’s mother had left, no one was telling him why, and he fell into a depression. After many sad and downcast conversations, one day Ron’s father offered an inspired solution to help him feel better: Take care of others.

"I wrote that down and carried that piece of paper with me for years and years," Ron says—and he took the advice to heart. Ron became a Boy Scout, and he found that doing volunteer work for people who needed help was, indeed, a healthy path out of depression.

Over time, Ron pursued his college education, earned a Ph.D. in engineering, and started his career. And along the way, he kept up his involvement with volunteer work for various organizations—especially a local organization that designed and built trails, where his Boy Scout skills came in handy.

After retiring from his paid job in 2014, Ron focused even more on volunteering—which continued to fulfill his life. But in 2018, complications from glaucoma and problems from surgeries caused a rapid decline in his vision. Ron lost 95 percent of his eyesight over a period of three months—and not surprisingly, he entered another period of depression.

"It was so much like what happened when I was 10 years old," Ron says. "I was lost." And even worse, "I couldn’t do my volunteer work that I’d been doing for years." He spent some time exploring books and music, but those pastimes weren’t entirely fulfilling. "And then I remembered what I learned 60 years earlier," Ron says, "so I went on a mission to look for new ways to volunteer."

Ron contacted local organizations that were looking for volunteers. He found two programs that needed people to visit with local seniors over the telephone—something he knew he could do even with vision loss.

Before long, Ron started thinking about more volunteer opportunities, and another idea came to mind. "I began to think, if I can combine my engineering and research background with what I’ve learned as a blind person, I can begin to research assistive technology for the blind," Ron says.

And that’s exactly what he did.

Ron spent hours listening to podcasts and web pages on assistive technology, then he started reaching out to different companies and universities to offer his assistance—and they welcomed his help. Now he’s working with several teams to help them develop devices and apps that help with navigation.

Ron helps university students research and create smartphone apps that help people walk safely without seeing, both indoors and out. And he works with wearable-device manufacturers, testing how easy and intuitive it is to use their devices, along with how well the navigation actually works. Once Ron provides his feedback, the development teams use his insights to make improvements.

Not surprisingly, Ron has taken many technology workshops through Hadley—which he’s found extremely helpful in writing his research notes. He has also submitted valuable suggestions for additional topics. And as a result, Ron added another volunteer role: He’s now a Hadley Advisor.

Thank you, Ron, for all you do to help others—and congratulations on becoming a Hadley Hero.