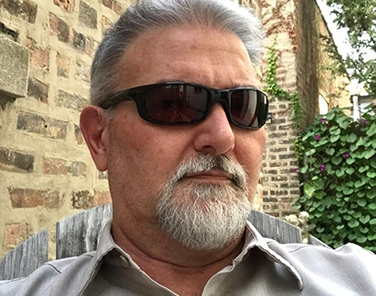 With a successful career as a healthcare administrator and consultant, Eric Boklage, 60, quips that he is a self-professed Type-A personality but trying to reform.

In his mid-40s, Eric experienced the first of several retinal detachments, each time undergoing the necessary procedure to repair and stabilize his vision. "I suppose I had a false sense of security following my surgeries," said Boklage. "I remember thinking 'great, I can still read' everything seemed back to normal so I would immediately jump right back into work."

Following his third reattachment surgery, Eric noticed a significant loss of his peripheral vision, accompanied by a sensitivity to light and a loss of contrast, complicated by an earlier diagnosis of cataracts. Following a referral to a neuro-ophthalmologist, Eric was told he had optic nerve damage and glaucoma.

With the assistance of various over-the-counter tinted lenses, and by adjusting the settings on his computer, Eric was able to navigate daily life and work responsibilities. "My vision issues weren’t obvious to others, so it was easy to fly under the radar." Boklage continued, "But by the end of the day I would get headaches and I was exhausted."

Eric is among the 12 million adults over 40 in the United States who have some level of vision loss that impacts their daily lives, including many who have limited vision even after corrective surgery or treatment. Eric refers to his condition as being "vision compromised" - living with functional vision, but with limitations imposed by irreversible loss of sight – a term popularized by Frank Bruni, an award-winning journalist who had partial vision loss following a stroke.

Things started to change for the better after Eric received a low vision workup at the Chicago Lighthouse where he was introduced to light-absorbing prescription low-vision glasses. "The new lenses were a real game changer for me," said Boklage. "I now wear them all the time, and they have opened up a whole new world for me."

Eric was encouraged by his wife to explore the many offerings at Hadley to better cope with his vision loss, so he began participating in Hadley's discussion groups and workshops on topics that interest him, including technology, writing and travel. Eric's background in technology proved particularly valuable, providing numerous suggestions to Hadley for improvements to its online learning hub, Hadley.edu.

For his many contributions, Eric has been named the latest recipient of Hadley's HEROES Award, given to those who help further Hadley's mission to create personalized learning opportunities that empower those with vision loss or blindness to thrive at home, at work, and in their communities.

While Eric continues to be available as a healthcare consultant, his current focus is graduate school where he is pursuing credentials in vision rehab, with a goal of being able to help others with visual impairments.

"One of the benefits that Hadley provides through its learning model and discussion groups is the realization that you're not the only person going through vision loss - you aren't alone," said Boklage. "Hadley has a lot of engaging, practical content that you just can't find in other places."