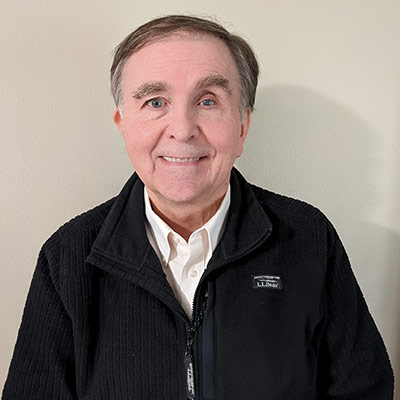 During a 30+ year career in marketing and public relations, Gary Zarembski developed an approach to work and life that focused on big ideas. His strategy was to turn them into reality one small step at a time. Now Gary’s found that he approaches vision loss the same way.

His personal journey with diminished sight started abruptly one morning 14 years ago. He woke up and discovered he just wasn’t seeing very well, so he jumped into his car to drive to his doctor. He got no further than the corner when he realized it wasn’t safe for him to drive.

Several visits to several different medical centers later, Gary learned that he’d had a stroke that affected his eyesight. "The doctors said I had a really unusual case because it didn’t happen in the eyes. It happened behind the eyes. So, I guess my freaky case is now in a medical journal somewhere," Gary quipped.

"This huge left turn in my life happened so very quickly. I needed to adjust instantly," Gary said. "Fortunately for me, years prior I had learned quite a bit about the help that’s out there for people who’ve lost some sight. My mother had macular degeneration in her late 80s. I had found help for her that I could now use myself."

Gary turned to a local vision rehabilitation agency, the Sight Center of Northwest Ohio, and they supplied the practical things he needed to get through the day and showed him how to use them. From white cane training to marking appliances in his home, they made a huge difference for Gary, helping him figure out how to live with his diminished eyesight.

"That day of my stroke changed my life, obviously, but I think more importantly I decided that day that I'm going to turn this into something positive for myself and not just a negative experience," Gary said. "I got excited about learning, which has been my passion my whole life. I decided that I would use what I have and focus on what I have, not what I lost. And I think that overall thought was the real secret to my wellness and happiness being legally blind."

Gary carried on researching, and that’s how he found Hadley. A representative from Apple’s support line recommended Hadley’s workshops to learn how to use Voiceover, the built-in feature that reads text aloud.

He also joined a local support group and found out quickly that a lot of people who have experienced vision loss later in life really don’t know what’s available to help them. So, he started sharing, and quickly became the go-to connector, helping people find the help they need.

And then he started thinking bigger. He started by approaching his local library. "I made friends with every single library branch in Lucas County." Gary said. He approached one librarian with the question: "How many people in this county have visual impairment?" and found the answer was 12,000 people across two counties. Then he turned to the local library for the visually impaired and asked how many people were using that free service. The number was just a fraction of the census number. "It’s an awareness problem," Gary realized. "And I’ve been tackling those kinds of problems my whole professional career. I can help!"

Gary’s big goal is to reach everyone with a library card in his county to let them know about specific resources that can help people with diminished vision live better.

Why the library? "Well, the library is often central to a community. And their business is information and helping people," Gary explains. "They have terrific technology and expertise. And it’s free. They’ve been so very helpful to me through the years."

He’s starting with a pilot program in Northwest Ohio, and he’s hoping to work with Hadley to take it nationally.

"This is still the early stages. I’m not sure where it’s going to go yet. But I’m really sold on spreading the word and getting information and resources out there. So many can benefit," Gary mused.

"I just want to open up life for everyone who's visually impaired," Gary said. "I was a maniac searching for information, so I looked at everything I could find. But I think a lot of people are more passive by nature. I want them to get exposed to

all the different things that are out there. Understanding what's available to improve the quality of their life—that's my goal."

For this big idea—and for all the energy he has spent for years, connecting people with vision loss to resources that can help—Gary has been named a Hadley Hero.